Video is a perfect complement to Sonitrol Pacific audio sensors. Together security cameras and video monitoring take your organization’s security to a new level. Our intrusion systems give you ears, now SonaVision™ gives you eyes. The two systems work together to watch out for you. Talk to one of our Security Consultants in the Everett, Seattle, Tacoma, Portland or Boise areas today and see what SonaVision™ can do for you.

Our System in Action

At 6:55 a.m., Stephany Ripley received a signal activation from the lobby doors of OST Partnership in Seattle and dispatched police. With SonaVision™ video surveillance, she observed the intruders’ activities and kept police informed. Officers arrived on scene at 7:01 a.m. One suspect tried to hide behind the elevator shaft, but his actions were caught on video and Stephany could direct officers to his hiding place. The other suspect attempted to make a break for it, but you can see the officers waiting for him as he opens the overhead door and crawls under. 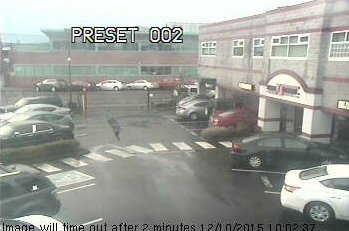 Sonitrol Pacific backs every security system with an unparalleled Commitment to Service. The Difference is Verification.

Working in concert with Verified Audio Detection, Access Control and any other modular components of your Sonitrol Pacific system, SonaVision™ video surveillance offers greater security for your property and your employees.

SonaVision™, Sonitrol Pacific’s video surveillance or CCTV solution, lets you see what’s going on at your protected site 24/7 and with a Sonitrol Pacific monitored SonaVision™ system, our Operators assess activity in or around your facility anytime an activation signal is received.