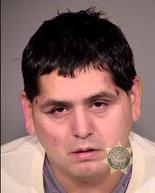 The suspect’s mugshot, courtesy of The Oregonian.

When police arrived, the suspect was found hiding in the bushes in front of the office. The man then became uncooperative and tried multiple times to attack the officer by punching him in the face, opening a switch blade, and kicking him in the chest. The police found the signs of an attempted break in, like cut window screens and pry marks on the front of the building– the same spots that alerted Joe to the suspicious activity, thanks to Sonitrol’s sound security solutions.

The suspect was booked into Multnomah County Jail on multiple charges, including attempted burglary, assaulting a public safety officer, carrying a concealed weapon, and criminal mischief. Find out more about our dental office security systems, or read a testimonial from a dentist who trusts Sonitrol Pacific in her office.